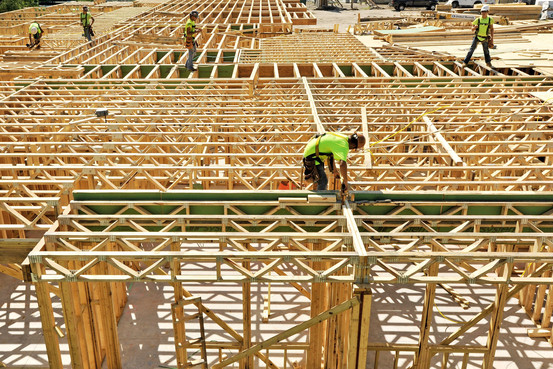 The pace of rent growth for U.S. apartments is accelerating despite an uptick in construction of new dwellings, as the economy steadily improves and vacancies remain stubbornly low.

Rental rates increased 1% during the third quarter to an average of $1,111 a month nationwide, according to Reis Inc., REIS +1.27% a real-estate research firm that collects data on 79 U.S. metropolitan areas. That was up 3.3% from the same quarter a year ago. Last quarter’s 1% increase was faster than the second quarter’s 0.9% rise.

Apartment rents have risen nationally for 23 straight quarters and are 15.2% higher than they were at the end of the recession in 2009. The figures suggest the five-year squeeze on renters shows little sign of easing.

“The market has been so tight for so long that it basically becomes a landlord’s market over time,” said Ryan Severino, an economist with Reis. He predicts the pace of rent growth will continue to quicken for the next 12 to 18 months, before moderating during the next few years.

A stubbornly low level of apartment vacancies is the biggest driver. Construction slowed from 2010 to 2012, pushing up prices for renters, especially in coastal cities rebounding from the economic downturn.

In all, developers added 46,055 new units to the apartment supply in the third quarter, a 23.1% increase over the rate of construction a year ago. But only 4.2% of apartments stood vacant in the quarter, down from 4.3% a year ago and much lower than the average of about 5.5% during the last 15 years.

Apartment costs are growing fastest on the West Coast, where rapid growth in the technology industry is fueling an explosion of demand in the Bay Area, Silicon Valley and the Pacific Northwest.

Rents in San Francisco grew fastest, at a rate of 6.4% over the last year, while San Jose has seen rents increase 5.9% and Seattle’s rents have jumped 5.7%.

Jesse Baker, 25 years old, moved to San Francisco from Los Angeles in 2012 to start work as a project manager for GoPro Inc., GPRO -7.44% a Silicon Valley designer of cameras that attach to drones, the tips of surf boards and other objects. Since then, the rent on his three-bedroom apartment in the city’s Noe Valley neighborhood has jumped 24%, from $3,800 to $4,700.

Last month, after his landlord raised the rent by $300, Mr. Baker and his roommates switched to a month-to-month lease so they can find cheaper housing without being locked in for an entire year.

“I would love to find a studio that’s affordable, but I don’t know if that’s possible anymore,” Mr. Baker said. “Moving here was kind of a shocker. But now that I’ve been surrounded by it for a couple of years, hearing all these ridiculous prices doesn’t really surprise me anymore.”

The housing market isn’t luring many renters off the rolls.

Despite near-record-low interest rates, the Mortgage Bankers Association last week reported that the number of applications for loans to buy homes was down 10.7% from a year earlier.

“We’re not seeing people move out of our apartments to buy single-family homes at the rate they have in the past,” said David Neithercut, chief executive of Equity Residential, the largest builder of apartments in the country. “We’re seeing a very, very strong demographic picture of the millennial generation, and lots of demand for rentals in center cities.”