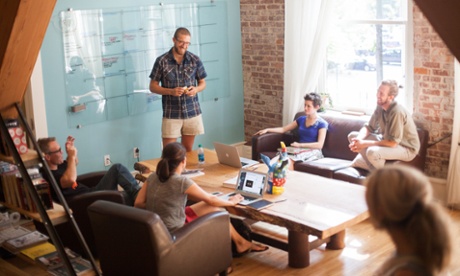 Fancy Rhino, a marketing and film production firm, has been working with The Howard School to include them in the city’s renaissance Photograph: Dominic Rushe/Guardian

Loveman’s department store on Market Street in Chattanooga closed its doors in 1993 after almost a century in business, another victim of a nationwide decline in downtowns that hollowed out so many US towns. Now the opulent building is buzzing again, this time with tech entrepreneurs taking advantage of the fastest internet in the western hemisphere.

Financed by the cash raised from the sale of logistics group Access America, a group of thirty-something local entrepreneurs have set up Lamp Post, an incubator for a new generation of tech companies, in the building. A dozen startups are currently working out of the glitzy downtown office.

“We’re not Silicon Valley. No one will ever replicate that,” says Allan Davis, one of Lamp Post’s partners. “But we don’t need to be and not everyone wants that. The expense, the hassle. You don’t need to be there to create great technology. You can do it here.”

He’s not alone in thinking so. Lamp Post is one of several tech incubators in this mid-sized Tennessee city. Money is flowing in. Chattanooga has gone from close to zero venture capital in 2009 to more than five organized funds with investable capital over $50m in 2014 – not bad for a city of 171,000 people.

The city’s go-getting mayor Andy Berke, a Democrat tipped for higher office, is currently reviewing plans for a city center tech zone specifically designed to meet the needs of its new workforce.

In large part the success is being driven by The Gig. Thanks to an ambitious roll-out by the city’s municipally owned electricity company, EPB, Chattanooga is one of the only places on Earth with internet at speeds as fast as 1 gigabit per second – about 50 times faster than the US average.

The tech buildup comes after more than a decade of reconstruction in Chattanooga that has regenerated the city with a world-class aquarium, 12 miles of river walks along the Tennessee River, an arts district built around the Hunter Museum of American Arts, high-end restaurants and outdoor activities.

But it’s the city’s tech boom has sparked interest from other municipalities across the world. It also comes as the Federal Communications Commission (FCC) prepares to address some of the biggest questions the internet has faced when it returns from the summer break. And while the FCC discusses whether Comcast, the world’s biggest cable company, should take over Time Warner, the US’s second largest cable operator, and whether to allow those companies to set up fast lanes (and therefore slow lanes) for internet traffic, Chattanooga is proof that another path is possible.