Developer Mark Randall cut his teeth over the last few decades building apartments for Atlanta’s middle-class with properties such as Alta Ridgewalk, a complex of low-rise buildings clustered around a swimming pool in suburban Atlanta.

That development stands in contrast to one of his newer projects, a luxury project dubbed Inman Quarter. Located in a trendy neighborhood east of downtown Atlanta, the units feature quartz countertops and the complex has a rooftop club room; the ground floor is filled with retail stores and restaurants. Rents in the complex, which officially opened a few weeks ago, run as high as $4,000 a month.

Mr. Randall’s shift from moderately priced to luxury apartments is emblematic of a broader trend taking place in cities across the U.S.—and partly explains why apartment rents are climbing at a rapid pace. 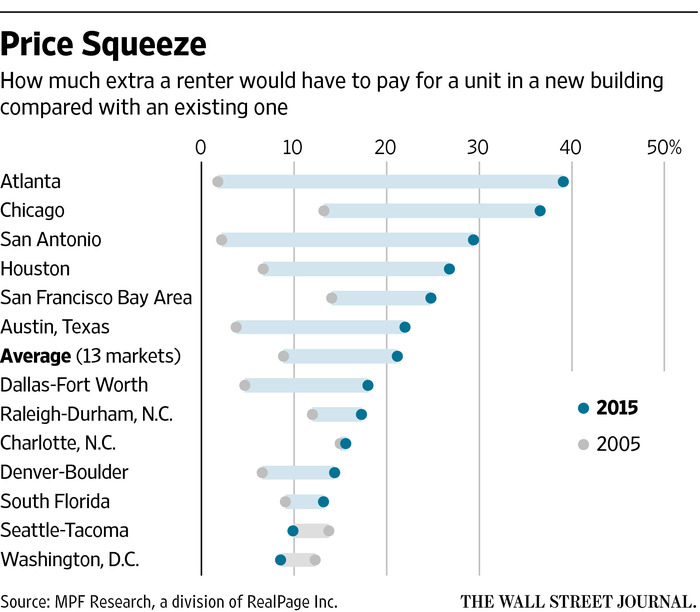 Of 370,000 multifamily rental units completed from 2012 to 2014 in 54 U.S. metropolitan areas, 82% were in the luxury category, according to CoStar Group Inc., a real-estate research firm. The firm defines luxury buildings as those that command rents in the top 20% of the market. In some places, including Denver, Tampa, Baltimore and Phoenix, virtually all new apartment construction has been targeted to high-end renters. In Atlanta, about 95% of new apartments have been in the luxury category.

“I don’t believe there ever has been a time where we have produced so much luxury rental housing,” said Susan Wachter, professor of real estate at The Wharton School of the University of Pennsylvania. While these new buildings are priced for the affluent, many middle-class and young workers are straining to rent the units, in part because they have few others choices.

New construction has almost always fetched higher rents than older units, due mainly to the rising cost of land and construction. But in past construction cycles, as new apartment buildings came online, landlords in older buildings sometimes reduced rents or at least didn’t raise rents, providing a steady supply of moderately priced apartments.

That pattern isn’t occurring in the current cycle, say economists, due in part to a supply shortage. In 1987, U.S. developers built 344,000 multifamily rental units, according to U.S. Census data. During the 1990s and the 2000s, the rate of multifamily construction declined to about 219,000 units a year—not enough to keep up with demand. Although construction is now picking up again and hit 328,000 units in 2014, “it can take many years or decades of sustained housing construction to ensure affordability,” said Jed Kolko, chief economist at Trulia. 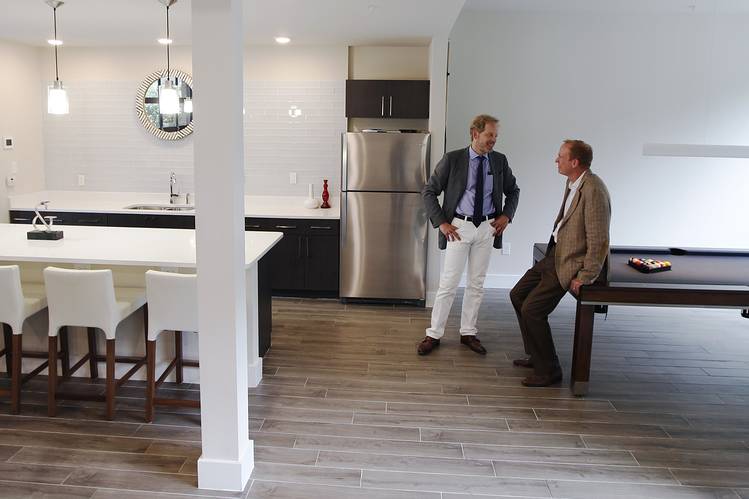 While some developers worry that the current construction boom could eventually result in overbuilding at the high-end—which could put downward pressure on rents for all types of apartments—there is considerable angst among city officials and housing advocates worried that the middle class is getting squeezed.

For years, many cities have offered a mix of tax breaks and incentives to encourage developers to build more moderate- and lower-priced apartments, while relying on the private market to provide middle-class rental housing. But now, experts say, the federal and local governments may need to consider targeting more subsidies not just to low-income, but also to middle-income renters.

Some cities, such as New York, are moving to require that new developments in some areas include more units for middle- and low-income families.

Even in Atlanta, long known for its low housing costs, officials are considering a mandatory requirement that developers of new housing help create units deemed affordable. “Individuals who are considered to be middle class…school teachers, city employees and bank tellers need housing subsidy as well,” said Terri Lee, deputy commissioner at the city’s Department of Planning and Community Development

Cities should also look at loosening many of the zoning and other regulatory restrictions that make development so costly and lengthy and have kept rates of new rental construction low in many places, experts said. Allowing developers to build smaller, micro-units, can also help keep rents more affordable to young professionals.

“If cities become places where only the very high-income households can afford to live…that’s going to be a problem for the businesses that want to locate in those cities,” said Ingrid Gould Ellen, faculty director of New York University’s Furman Center.

Mr. Randall, owner of privately-held South City Partners, said when he started 30 years ago “almost 100%” of what he built was low-rise, suburban buildings with rents of about $1,000 a month in today’s dollars. Now, even as his business has shifted almost entirely to urban projects like Inman Quarter, he fears the supply of new high-end building could be overdone.

As a hedge, he’s in the process of purchasing two sites in suburbs of Atlanta where he hopes to return to building apartments for about $1,200 a month on average. He said the challenges are steep because suburban communities often oppose multifamily projects and banks aren’t anxious to finance middle-market projects.

“The real challenge…is what do we do about creating an affordable place for folks to live,” he said. “I do worry that the production that we’re talking about at north of $2-a-square-foot rents, there is only so many people that can afford that.”